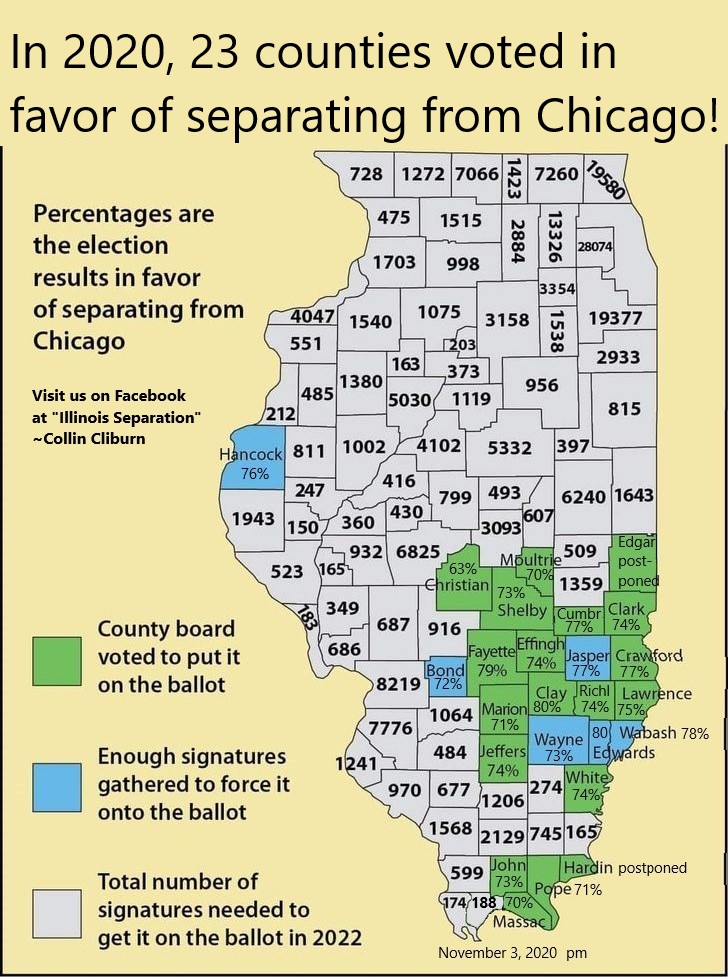 There are multiple ways to reduce the influence of cities on state politics, even though SCOTUS has ruled against giving rural areas disproportionate power in a state senate. The only way to directly counter that ruling would be for red states to secede from the U.S. and create a red-state federation so that states are free from the US Supreme Court. Then they could revise their state constitutions to give rural counties their proper voice.

A less ambitious solution is to merely move state lines so that rural counties can join rural states (or at least conservative states).  As the Left and Right in America grow more distant, and the friction between them grows more dangerous, moving state borders can help de-escalate. It’s been done before many times in history. There are analyses regarding moving state borders for Pennsylvania, Illinois, Oregon/California, Virginia, New Mexico, and Colorado.  Each of these analyses involve neighboring states.  They describe how moving borders can be arranged to be a benefit to each of the decision-making bodies involved.

These two solutions can be combined:  After red states secede, red counties from blue states could join the red states.

A third solution is to revise a state constitution to divide the state into two or three totally autonomous regions. This idea was introduced as a bill in 2019 by New York state assemblyman David DiPietro. New York would split into three independent districts, each with its own governor and legislature – but would remain one state for the federal government’s purposes. It would still have two U.S. senators. But the New York constitution would be totally revamped to split the state in every other way. Each district would have its own acting governor, state legislature, state laws, state judiciary, state budget, state pensions, etc. This idea is supported by a Facebook group of 31,000 members. We applied this idea to Washington State and created a humble group.

A fourth solution is to create a new red state out of a portion of a blue state.  Congress might approve this if the two Republicans added to the US Senate would be balanced by two new Democrat senators from a new blue state.  Unfortunately, the list of candidates for new red states is much longer than the list of candidates for new blue states, so there are no guarantees your candidate will be chosen.  The list includes New California, State of Jefferson (California/Oregon), Liberty State (Washington), eastern Colorado, northern Nevada, western or eastern shore Maryland, and Superior (upstate Michigan). Senator Chuck Schumer will reportedly introduce a bill to add Puerto Rico and upstate New York to the Union, although the report cites no sources.  Upstate New York would be a purple state, not a red state.  The only other potential blue state I’ve heard of is 99% of the land area of the District of Columbia (minus the Capitol area). The Constitution specifies no minimum size for DC.  It’s questionable whether senators will start adding pairs of states to the Union, as this slightly dilutes their own power, and their state’s power.

In Illinois, a handful of unpaid activists with day jobs managed to organize a movement to get county separation from Chicago onto 2020 ballots in 23 counties by collecting signatures.  All 23 counties voted in favor of separating; one voted 63% in favor and 22 voted between 70% and 80% in favor. The largest group of counties that voted on the issue are a group bordering southern Indiana.  Although the Illinois General Assembly would be reluctant to add two Republicans to the US Senate, it might be willing to let these counties share Indiana’s senators.  Getting rid of these counties would actually improve Illinois’ state budget outlook.  Yet if Indiana is choosy about which counties it selects, it could choose a group of counties that would match Indiana’s average income.   Illinois’ legislature certainly wouldn’t miss the Republican state legislators that downstate Illinois sends to Springfield. This month, my group Downstate Illinois Secession is reaching out to legislators of neighboring states Indiana, Missouri, and Kentucky to ask them to have their governments fund studies on the impacts of moving state lines to annex southern and central Illinois.

We polled northern Illinoisans to see if they would be willing to let these counties go. We paid to have that poll shown to those that Facebook categorizes as “liberal” or “very liberal” because those are the voters that matter in primary elections of northern Illinois state legislators. We were pleased to see that 66% were in favor. If a deal to move state lines is made with another state, it could be approved in the Illinois legislature by a coalition of northern Democrats and southern Republicans.

Last month, two conservative counties in Oregon voted in favor of the idea of moving the Oregon/Idaho state line, in the hope that southern and eastern Oregon might become a part of Idaho. More will vote on the issue in May 2021. Relocation of a state border occurs via an interstate compact between two states, if approved by Congress.  Oregonians (another group of unpaid activists) have articulated why moving the border is a win for each of the decision-making bodies involved.  The governor of Idaho welcomed the idea, and the President of the Oregon Senate seemed to allow that “hatred” (divisiveness) might split Oregon.

Rural legislators have no power in a blue state. A blue state is governed by the Democratic Party caucus of each house of the state’s state legislature. Democratic caucuses in blue states don’t consult with Republican members in years when their votes aren’t needed to pass legislation. None of the members of the Democratic caucus in Oregon have a predominantly rural district.  It gets worse. Because of gerrymandering, almost all Democratic members are more concerned with the primary election than with the general election.  So even members who have some rural areas in their district know that not many rural people will vote in their party’s primary elections, because they vote in the other party’s primary. The result is that rural concerns don’t have any leverage in the Democratic caucuses that run the state.  No one in the ruling caucus has an incentive to make it their job to understand or vote based on rural concerns.

Rural counties in blue states are told that they benefit financially from remaining in a blue state because they are subsidized by the high-income suburban portion of the state. Don’t believe it. Even without a big metropolitan area to subsidize them, rural/small town Indiana counties actually have a 3% higher average per capita personal income than rural/small town Illinois counties, and a lower unemployment rate, according to my tabulation of U.S. government BEA data.

Indiana industries are not held back by blue-state regulation. For example, the Illinois Basin contains huge amounts of shale oil and natural gas that is barely tapped in Illinois, but is being drilled and fracked in neighboring states. Oregon refuses to approve the Jordan Cove LNG pipeline, despite federal approval. Minimum wage laws in blue states don’t allow rural businesses to compete with other states’ businesses.  Hillary states have a lower standard of living than Trump states because the difference in cost of living is greater than the difference in per capita personal income according to U.S. BEA data.

Blue states have been captured by the worker’s unions for government employees. These public employee unions determine who wins primary elections for the Democratic Party. These primary elections are the elections that matter for the vast majority of the legislators in a blue state.  The difference in spending between a blue state and a red state includes a bit of a safety net, such as Oregon’s socialized state health plan. But most of the difference in spending goes to hiring unnecessary government employees with unnecessarily large compensation packages, and unnecessary freedom from firing. This is an extraordinarily inefficient way to try to be a financial benefit to a county, because most of those employees, if not employed by the state, would be employed in a productive sector of the economy.  The financial benefit to a county is merely the difference in compensation packages between a resident state government employee and the compensation package he would have made in a productive job. But even that overstates things, because many public employees move to a low-tax state (a red state) as soon as they retire, taking their bloated pensions with them.

Red-State Secession is the pseudonym of a political activist who blogs at RedStateSecession.org and administers a Facebook group called Downstate Illinois Secession.  He is a red-state Yankee.

2 thoughts on “How Red Counties Can Escape Blue States”