Blue States don’t have to be Contiguous 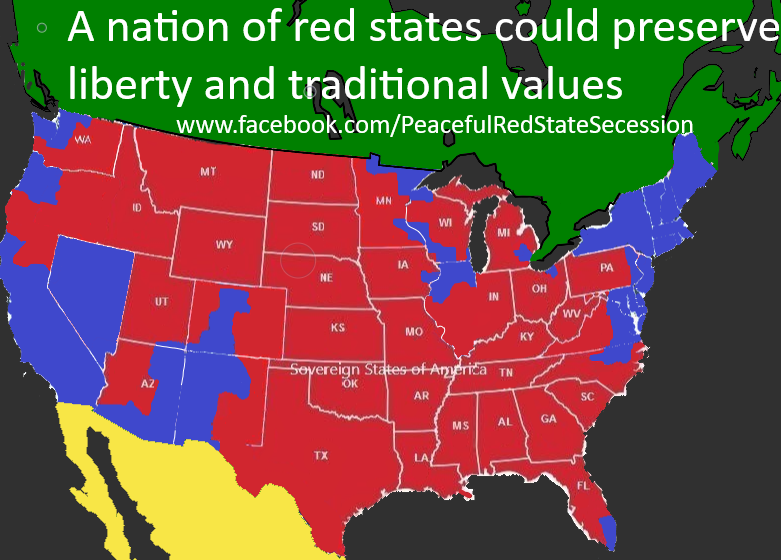 An exclave is a portion of a state or territory geographically separated from the main part by surrounding alien territory (of one or more states).

Semi-enclaves and semi-exclaves are areas that, except for possessing an unsurrounded sea border, would otherwise be enclaves or exclaves.

On this map, after secession, Miami, Illinois, and Cleveland would become both semi-enclaves and semi-exclaves. Detroit and Duluth (Minnesota) would not if they became provinces of Canada. Miami, Illinois, and Cleveland would be semi-exclaves because the land routes to each other would only be through a foreign country. But they would not be full exclaves because they can communicate via international waters. They would be semi-enclaves because they would be surrounded by a foreign country, except by water. The waters are what prevent them from being full enclaves.

List of areas that are connected to the mother country only by water with no land route:

Hawaii, and all US Territories, and any island that is not a nation.

List of areas that are connected to the mother country only by water but border on other countries:

French Guiana (legally an integral part of France, as French as any province)

As for access to each blue state by blue state troops, they could fly in or take a ship, as the Great Lakes are international waters with access to the Atlantic via the St Lawrence seaway.

Also remember Minnesota and Detroit can get to New York via Ontario if they don’t want to go through red states.

Also, different groups of blue states could become independent countries, especially if they decided to join a North American Union (NAU) with Canada and probably Mexico. In the world today, the average nation (not including India and China) has 23 million people, and the median nation has 9 million people. The average US state has 6.6 million.

If they do join a NAU, then free passage can occur through Canada and Mexico too.